Skip to Content
Home Food Why Tuesday is Taco Day

Unless you live in the Southwest, you may not be familiar with Taco Tuesday, but it’s a tradition among Mexican restaurants, both large and small, to feature tacos at a discount each Tuesday thus generating more business, and allowing families to dine out for less. (Think of them as Mexican happy hours.) And you may not be familiar at all with the most popular taco, namely the fish taco.

Although many people still think of ground beef and shredded lettuce as the filing of choice, the fish taco tops the hit parade in most restaurants, especially in California and other border states, and traditionally contains shredded cabbage, a piece of fried white fish or grilled mahi mahi, white cheese, maybe some avocado slices and topped off with a creamy dressing. There are a lot of variations, of course, which might add salsa fresca or chile peppers, served up with a wedge of fresh lime (an essential). And of course, there are always the designer and gourmet variations, which may include lobster, shrimp, calamari or salmon, with a melange of fillings. There is almost no end to the ingredients (and prices) depending on where you dine. 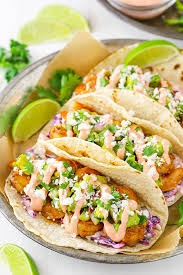 Tacos de pescado (fish taco) originated in Baja California, Mexico, where they consist of fried or grilled fish, shredded lettuce or cabbage, pic de Gallo, and a creamy sauce, all nestled on top of a tortilla (flour or corn). Historians seem to agree that in the U.S. the first tacos, which were housed in a crisp shell, can be attributed to Taco Bell, where they were served to a receptive dining audience, and contained ground beef, lettuce, chopped tomatoes, a bit of cilantro and shredded cheese, but in all likelihood had been served years before in a handful of Mexican restaurants. The hard shell variety is not native to Mexican cuisine but was embraced by Americans as a fun snack or meal, often accompanied by rice and beans, The concept of fish tacos is nothing new. Mexicans have been wrapping fish and other seafood in corn tortillas for centuries but probably didn’t garnish them with pic de Gallo or creamy dressing. They ate them in a simple sandwich-style.

And embraced they were. In 2016, Americans ate over 4.5 billion tacos. That’s roughly 490,000 miles of tacos, which would take you to the moon and back or could equal the weight of two Empire State Buildings. Wow, just think of the salsa that would be needed.

There is no question that the king of fish tacos is Ralph Rubio, who as a young college student headed south to San Felipe on the Baja Peninsula each spring break to surf with his college friends, living on beer and the local cuisine, fish tacos. The legend goes that young Ralph could not talk the beach vendor into returning with him to San Diego and opening a taco stand, so he decided to do it himself in the early 80s. California surfers flipped over the tacos, as Ralph’s future was secured. And yes, Rubio’s has Taco Tuesday each week, featuring his original recipe for under $2, packing in hordes of hungry fans.These days, San Diegans consider the fish taco as their official food but may disagree on where to find the best ones. More popular than the ballpark hot dog, you’ll see thousands of baseball fans wolfing them down at Padre games.

Hole-in-the-wall stands can serve up some of the cheapest and tastiest, but many just head for their local Rubio’s knowing they will not be disappointed. Since most Mexican restaurants feature a salsa bar, you can drown your taco of choice with cilantro, several types of salsa, hot sauce and lots of fresh lime juice. Popular chains La Salsa, Chipotle and Baja Fresh have certainly helped spread the fame of soft tacos, along with numerous regional shops.

The carne asada taco, made with shredded beef or pork, also reigns but never quite measures up to the fish version. And of course nothing goes better with any taco than a cold Mexican beer or fresh lime margarita. If you have never tried one, take your first opportunity to enjoy this delicious import from our Southern neighbors.They make for a simple buffet dinner, an easy sports party snack or an inexpensive workplace lunch. Best of all, it doesn’t have to be Tuesday.